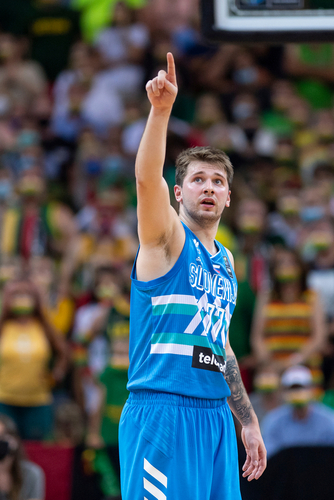 This week, we released our NBA ratings for the 2022-2023 season! The ratings are available in our basketball app, and will be updated daily for the rest of the season!

I've had a blast browsing the ratings this week: there are so many fun narratives. So in this blog post, I'll cover my top three takeaways, which are

This blog post is a slightly expanded version of the newsletter update we provided earlier this week.

Why did Luka make the leap? There are two main factors:

This is the first season Luka has both of these factors working for him. You can see this by looking at his career table

2019 Luka had near-peak box-score statistics, but mediocre adjusted plus-minus (at least according to his standard). This flipped in 2020, and in 2021, Luka had less than peak performance in both statistics. This season, Luka has elite box score-statistics and an elite adjusted plus-minus. That's why he's the #1 player.

So how does Luka compare historically? Can Luka catch LeBron? Is Luka better than KD? We can leverage our basketball app to compare LeBron, KD, and Luka's performance in their under-25 seasons 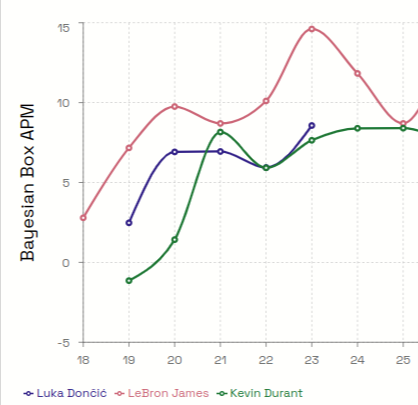 As it currently stands, Luka is a notch below LeBron. Luka's historical performance is closer to players like Chris Paul, Kobe, and Durant. Luka needs one more leap if he wants to catch King James.

Luka is destined to dominate the NBA's statistical landscape for the next 5-10 seasons. Especially as Jokic, Embiid, and Giannis inch toward their 30's. In Luka's age cohort, the only realistic challengers are Ja Morant, Jayson Tatum, and maybe Zion. But even here, Luka is starting to separate, and that gap feels poised to widen.

Two under-25 guards burst into the top 15 this season: Tyrese Haliburton and Shai Gilgeous-Alexander (SGA). I'd bet that they're both here to stay.

The Haliburton and SGA leaps are a bit different. Let's take a look at the graph 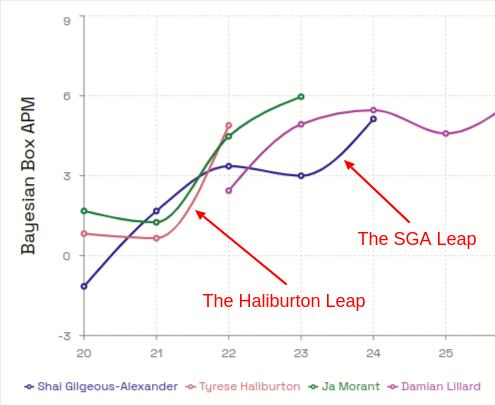 Haliburton's leap was sudden, and it is very similar to Ja Morant's leap last season. SGA's leap was smaller, since he was starting from a higher point. The closest comparison I could find to SGA's leap was Damian Lilliard's second season.

Let's deep dive into why Haliburton and SGA moved into the top 15.

The most important factor behind Haliburton's jump is his trade from the Kings to the Pacers. Haliburton is now a #1 option. And this season proved that Haliburton could thrive in a #1 option role.

Statistically, there are two drivers of Haliburton's leap

Let's pull these up in Haliburton's career table

Who won the Haliburton trade?

So who won the Haliburton trade? As a quick refresher, last season the Kings traded Haliburton to the Pacers for Domantas Sabonis. In addition to the Kings getting Sabonis, they also cleared space for De'Aaron Fox to be the dominant ball-handler.

To evaluate the trade, let's look at Haliburton, Sabonis, and Fox's ratings by age: 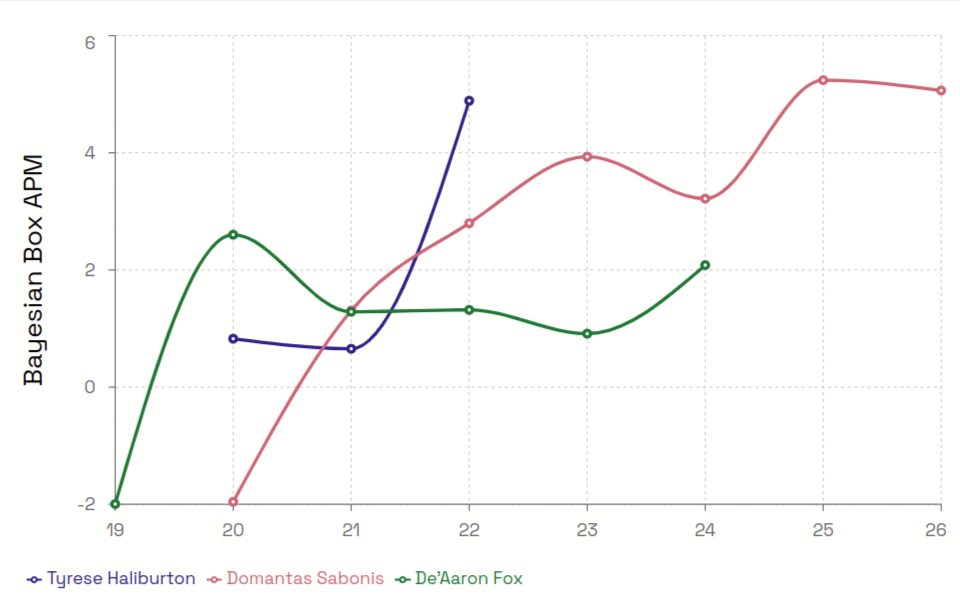 All things considered, I'd rather be the Pacers than the Kings. The Kings have two good players (Fox and Sabonis) entering their primes. But the duo won't be good enough for championship contention. Fox and Sabonis could be the #2 and #3 best players on a championship team, but they still need a superstar.

In contrast, the Pacers have a 22-year-old superstar they can craft their future around. So although the trade isn't a slam dunk, the Pacers got the best player, and probably won the trade.

It remains to be seen if Haliburton can translate his immense potential into a #1 role on a championship team. He needs one more leap for this. But the signs are encouraging.

The SGA leap is less dramatic than Haliburton, but it's an important development for the NBA. Similar to Luka, SGA's ascent has been building for a while. And this is the first season where everything came together. Let's take a look at his career table

The primary factor in SGA's leap is moving from a negative to an average defender. SGA has always been a negative defender, and this year is the first time he has moved to slightly positive.

The other major factor is that SGA's box score statistics are at an all-time level. But what's interesting is that SGA's box score statistics were close to this level in 2020. The main difference is that now, SGA scores much more. And in 2020, SGA was a slightly better shooter. Both the 2020 and 2022 seasons are big improvements on the 2021 season, which now looks like down year.

SGA is poised for another 5 years of All-NBA performance. If he can continue to improve as a defender and match his 2020 shooting levels, he may be poised for one more leap.

Story #3: Russell Westbrook has been good for the Lakers

This argument was a bit extreme, but not unreasonable. Last season, Westbrook has the worst performance of his career 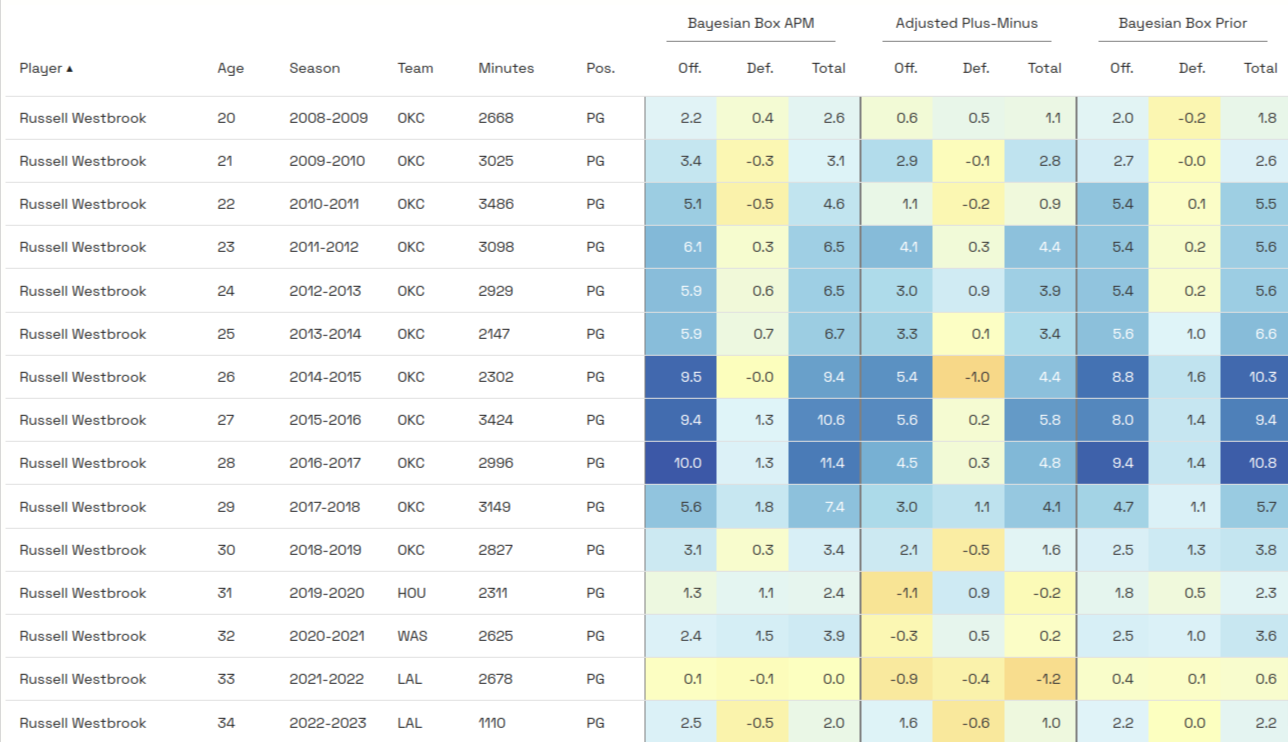 But Westbrook bounced back this season. Our ratings indicate that he is the third-best player on the Lakers, although there is a possible Reaves vs. Westbrook debate. 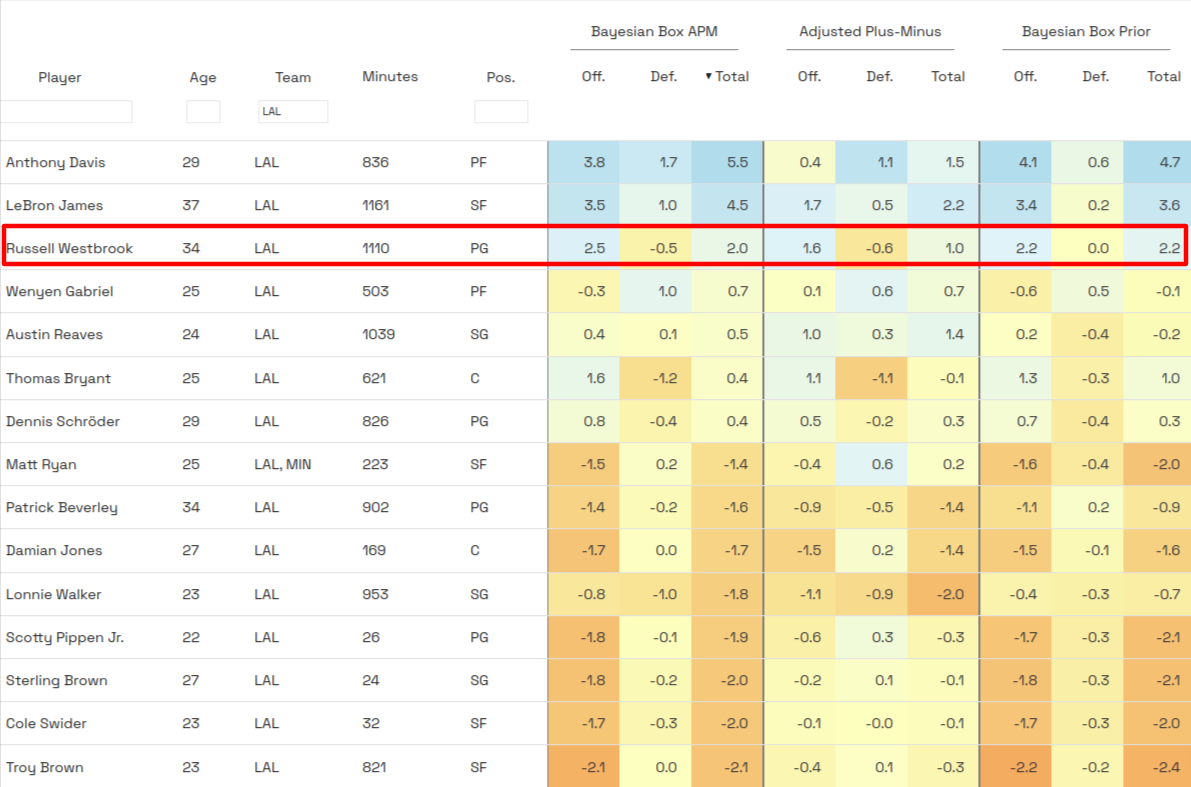 Westbrook's positive impact comes on offense. On offense, Westbrook is putting up good box score statistics, and has a positive adjusted plus-minus. This makes sense, because outside of LeBron, the Lakers don't have many players who can create baskets. Westbrook fills this gap, which provides value to the team.

Westbrook is still a negative defender. But he is not a disaster. His defensive performance is surprisingly similar to Patrick Beverley.

Austin Reaves, also somewhat surprisingly, is showing repeatable signs of good defensive performance. This is Reaves' second consecutive season of positive defensive adjusted plus-minus. If it happens again next season, then the Lakers will be onto something.

Overall, Westbrook's outlook improved this season. Especially when you compare it against the dire predictions. He is still a useful player, especially now that he's willing to accept a 6th man role.

Those are my three top takeaways from the 2022-2023 NBA season. But there are so many more. All of the figures in this post were generated using our basketball app.

Go explore the App to create similar figures! You can sort by team, position, and age. You can view a player's APM statistics throughout their career. And you can compare players in the database.

As always, let us know if you have any thoughts or feedback! We love to hear from you. And if you get the chance, please share the new app with folks you know. It helps us get the word out.