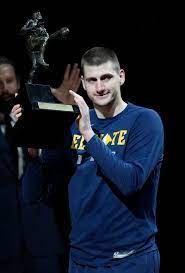 Bayesian Box APM predicts possession outcomes better than adjusted plus-minus, or box-score statistics alone. Also, Bayesian Box APM recovers the MVP in 9 of the last 13 seasons, and only falls outside the top 2 once. This indicates that Bayesian Box APM combines data similar to basketball experts.

Intraocular will provide daily updates of Bayesian Box APM throughout the NBA season. Go check it out, and let us know what you think!

Imagine that you're picking the NBA MVP for this season. You consider yourself a data-driven person, and you want to check what the numbers say. You found a few websites with player statistics, so you fire open a few tabs.

The first page you look at has standard statistics (like points, rebounds, assists) from ESPN. The final column, called PER, combines these statistics into a single metric, so you sort by PER and look at the results:

This looks great! You exclaim. Jokic and Embiid are the top MVP candidates this year, and PER puts them #1 and #2.

But your heart sinks when you scroll down the page. Robert Williams #8? That can't be right.

So you check out another source. This time, you look at a players adjusted plus-minus for the season:

Hmm... you wonder, did this help? LeBron and Paul George are in the top ten. That makes sense. But where's Jokic? Where did Gobert come from? And is Dorian Finney-Smith any less strange than Robert Williams?

How can you make sense of the two tables? Should you take a weighted average? If yes, how much weight should you give to each statistic? What are the best weights? How can I tell? What's the difference between a 30 PER, and a 3 Adjusted Plus-Minus? The questions never end.

This is the problem that Bayesian Box APM solves. The premise is that box score statistics and adjusted plus-minus provide useful information about player performance. So Bayesian Box APM combines both data sources into a single model, and learns the combination that maximizes prediction accuracy.

Let's walk through an example of how Bayesian Box APM works.

To get a feel for how Bayesian Box APM works, let's walk through an example from the 2020-21 NBA season. The following table ranks the top 10 players by the box score prior learned in the Bayesian Box APM model:

A few things to point out:

Let's see how this works. The following table shows the top 15 players ranked by Bayesian Box APM. The "Diff" column says how much higher/lower the player is in Bayesian Box APM, compared with their Prior: 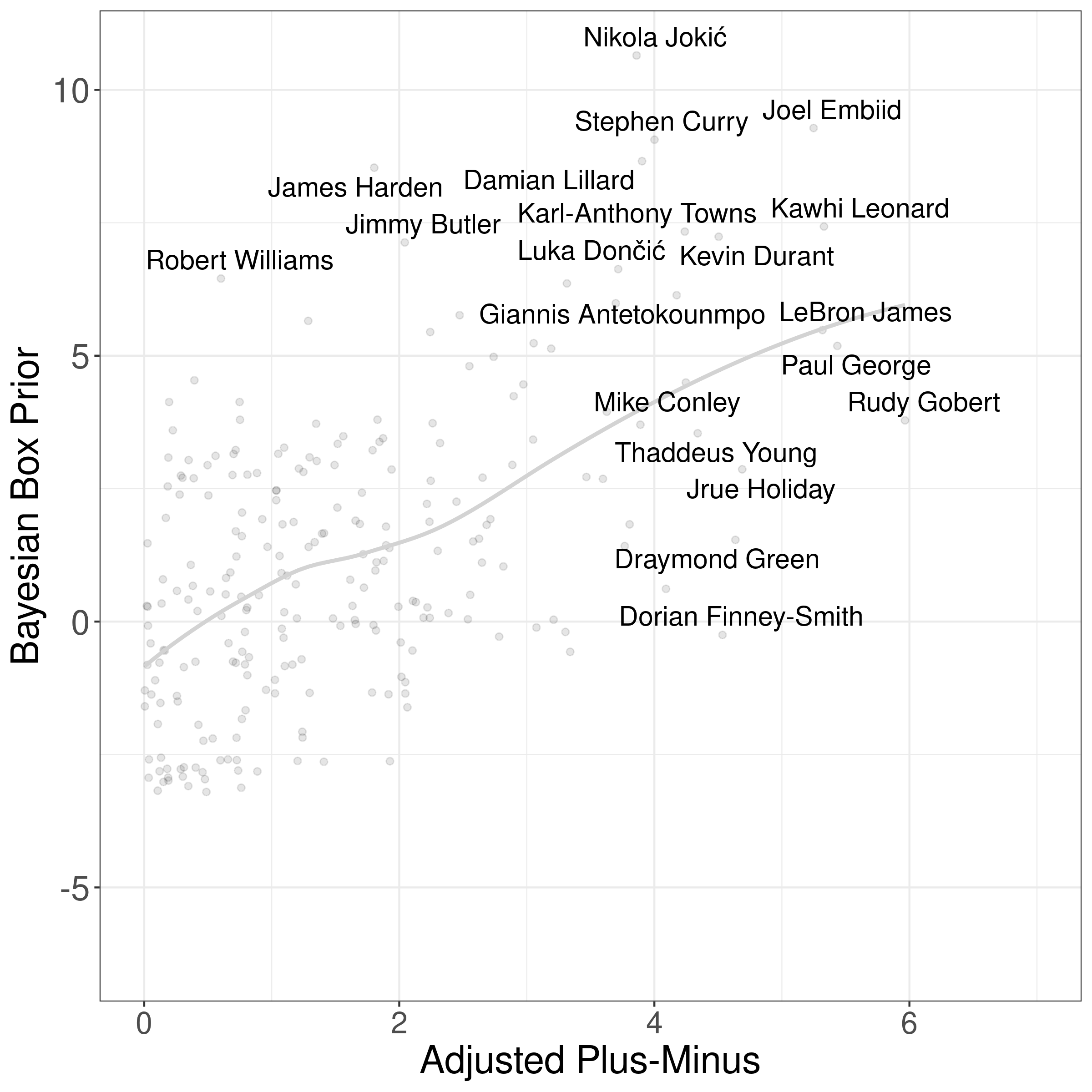 You may notice that Embiid is the #1 Player, not the MVP Jokic. This doesn't mean we'd select Embiid as the MVP. Bayesian Box APM is a per possession statistic, which means it doesn't account for total minutes played. Jokic played 45% more minutes than Embiid. So in aggregate, Jokic likely had more impact. More on this later.

For folks interested in more detail, see the appendix of this blog post. For the rest, let's look at some results.

The previous section gave you an intuitive understanding of how Bayesian Box APM works. Now is the fun part: the results. The questions we'll address are:

Let's start with the best players.

Who are the best players in Bayesian Box APM?

A key motivator for Bayesian Box APM is that other statistics don't pass the eye-test. You saw this earlier: Robert Williams was #8 according to PER, and Dorian Finney-Smith was #8 according to APM. Engaged basketball fans know these aren't top ten players. We'd like our metrics to reflect this.

Before looking at the MVPs, we need a metric that captures total impact. Remember: we need to give Jokic credit for playing more minutes than Embiid.

A quick way to capture this is to scale Bayesian Box APM by the number of possessions played by each player during the season. We'll call this Season Adjusted Plus-Minus (Season APM):

This isn't perfect. For instance, it favors players on teams with a faster pace. But roughly speaking, it works.

Now let's look at the MVPs. For each season, the our table shows:

Bayesian Box APM captures the MVP in 9 of the 13 seasons. In two seasons (Durant MVP, Jokic MVP), the MVP was simply the player with the highest Season Adjusted Plus-Minus (Durant played more than CP3, Jokic played more than Embiid).

The two MVPs that deviate are Rose in 2010-11, and Giannis in 2018-19. In each case, the decision rested on the Best Player on the Best Team argument. Why doesn't Bayesian Box APM reflect this?

One explanation is that the voters were wrong. Folks may have irrationally gone against LeBron as payback for The Decision. But another explanation is that Bayesian Box APM could do a better job incorporating wins, not just points, into the model. To be continued.

Final observation on the MVP: The effects of age are striking. Each top rated Bayesian Box APM player is between 25 and 29. So if you're a young NBA superstar who cares about legacy, you should consider making a run at the MVP sooner rather than later.

Good ratings shouldn't just get the first position (MVP) correct. We can also eye-test the top 20 or so players, by looking at the All NBA teams. We construct all NBA teams by iteratively adding the best player at each position, according to Season Adjusted Plus-Minus. Here's the 2020-21 Bayesian Box APM all NBA teams:

Let's compare this against the real all NBA teams:

You can see that these are very close. Some observations:

How predictive is Bayesian Box APM?

These models capture the general structure of one-number statistics in the NBA. We have Box Only (Bayesian Box Prior), APM Only (Linear), Regularized APM (Ridge, Bayesian APM), and combined (Bayesian Box APM). We don't compare specific implementations of similar models (PER vs. BPM, RPM vs. EPM, etc.). This is partly because it's easier, but also nice because it isolates differences in model structure from differences in training data and preprocessing.

We compare models using 5-fold cross-validation on the 2020-21 season. Here are the results: 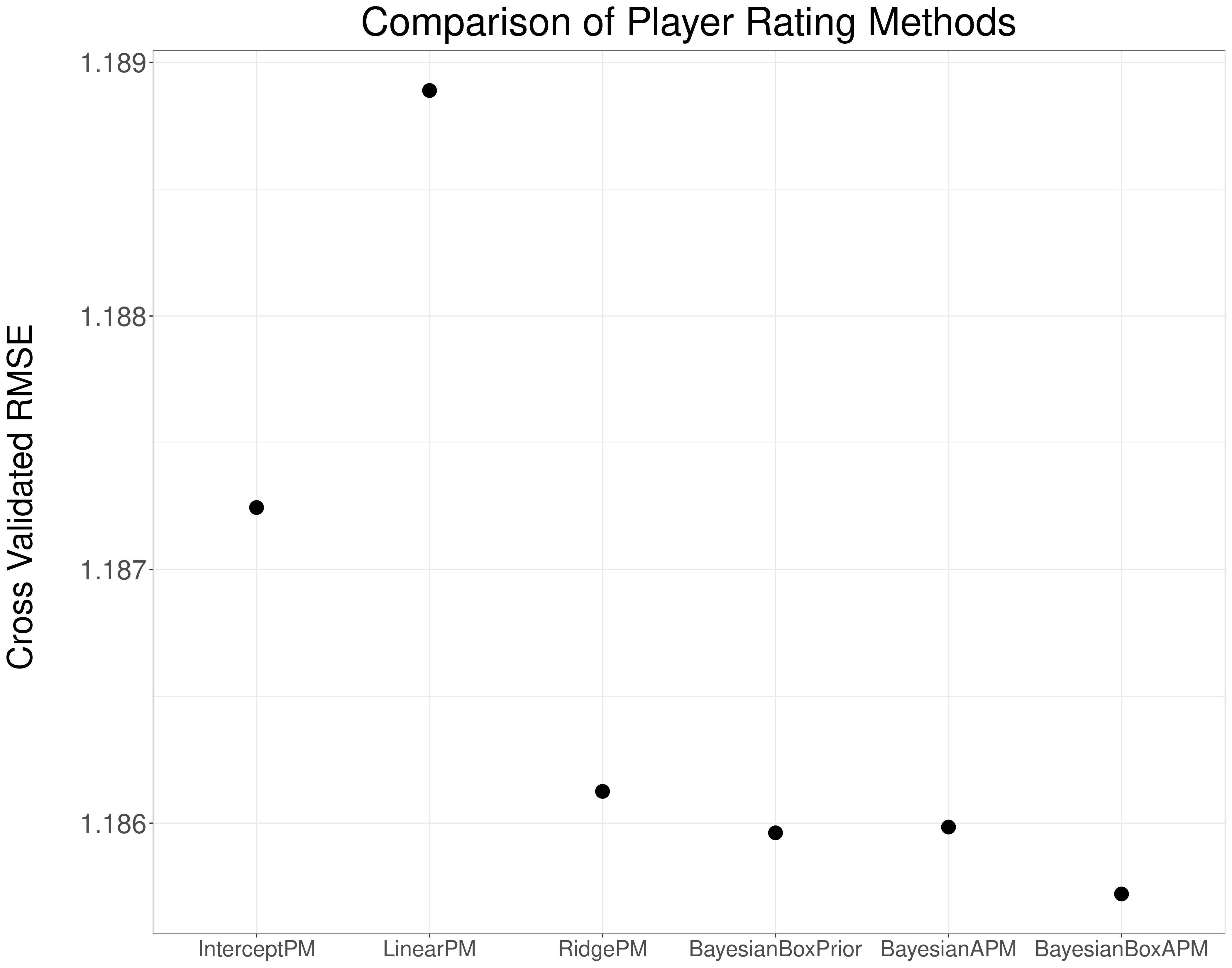 The results match intuition, with a few interesting tidbits. The main takeaway is that Bayesian Box APM successfully combines box score statistics and adjusted plus-minus into a more predictive model. We shouldn't be surprised by this: why would we do worse with more data? This also matches our findings in soccer.

Another observation is that prediction accuracy from the Bayesian Box Prior and Bayesian APM are roughly equal. This indicates that the predictive power of each data-source is roughly equivalent (at least with a single season of data).

Finally: You may notice that the Linear APM model was less predictive than the Intercept model. This points to the massive importance of regularization. Hat tip: Joseph Sill.

Which box score statistics are the most important?

A nifty feature of Bayesian Box APM is that we learn the value of box score statistics directly in the model. It's fun (and illuminating) to look at the coefficients over time.

In Bayesian Box APM, each box score statistic is computed at the per possession level (example: 2PM per Possession). The final values are standardized (mean 0, standard deviation 1), so that coefficient values are comparable. Here are the offensive coefficients over time: 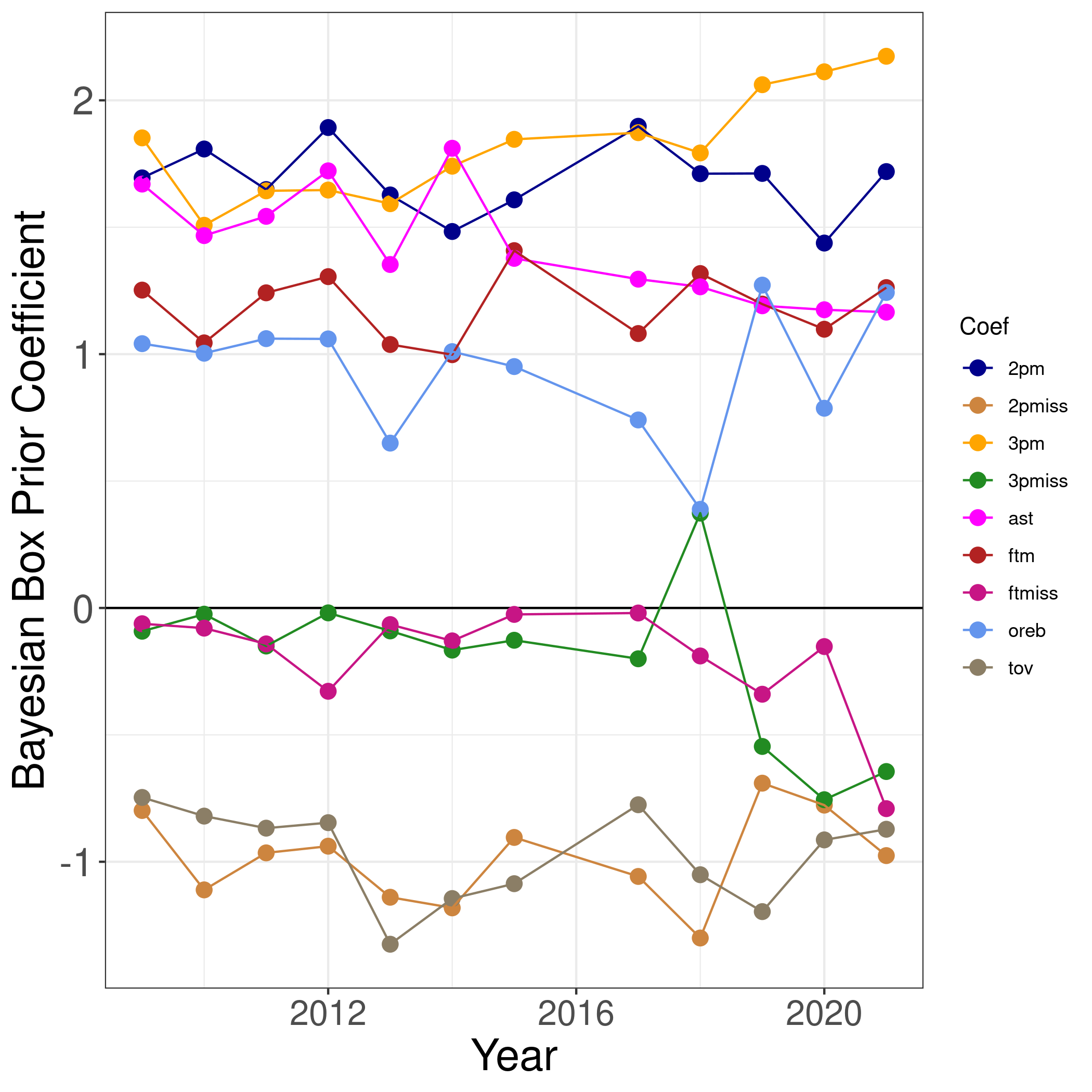 Let's look at the coefficients for defensive players: 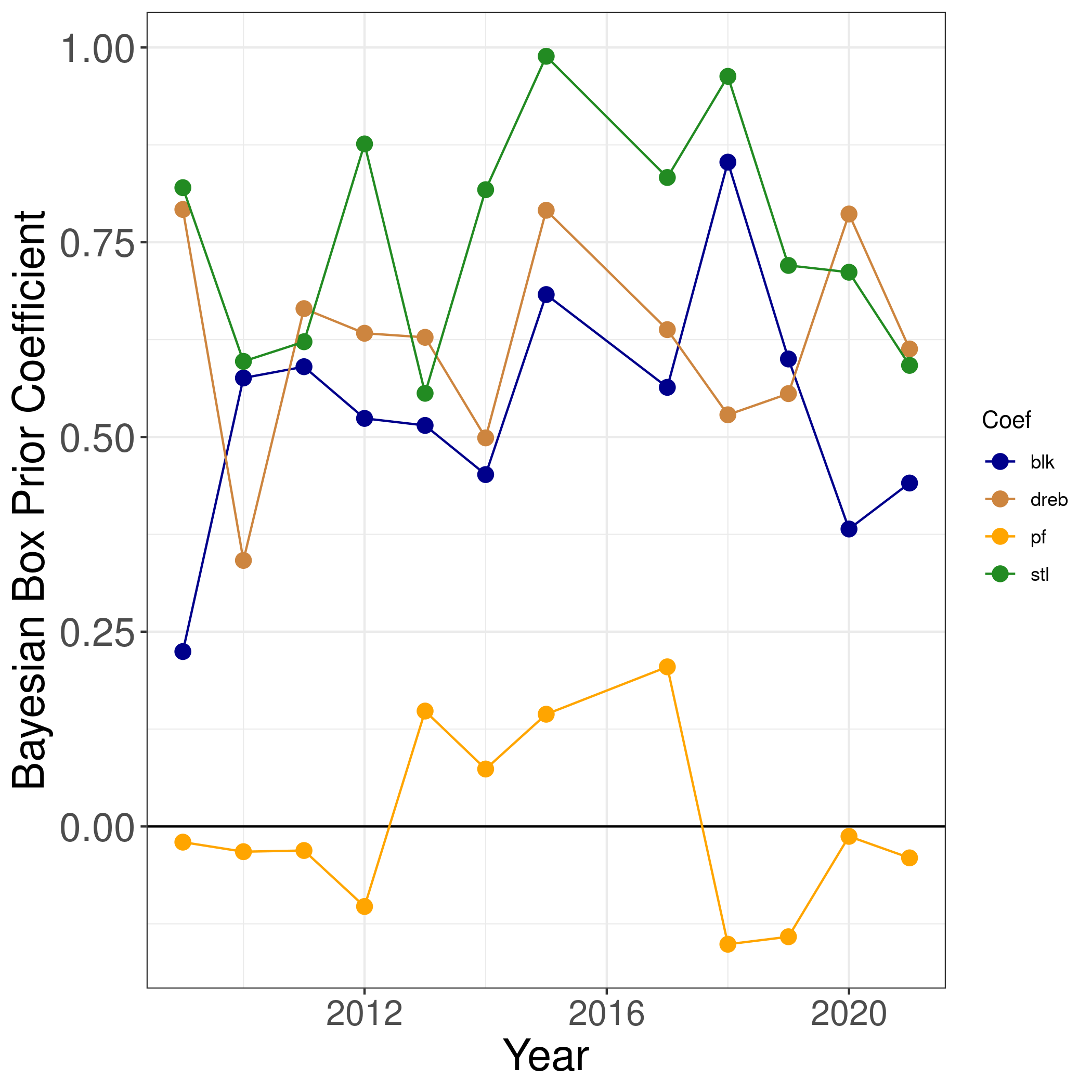 The best part of creating a new model is looking at the results. You often have follow up questions, or you want to dig into specific details. For this, Intraocular is releasing an App with daily updates during the NBA season.

The app is similar to our soccer app. We have a table with results for each Season, dating all the way back to 1996-97, which is the first season with play-by-play data. For each player, we display Bayesian Box APM, Bayesian Box Prior, Adjusted Plus-Minus, and Season APM. Each statistic is split into an offensive and defensive component. We also made the data easy to download, so folks can do their own analysis. Here's an example of what the table looks like in the current, 2021-22 season: 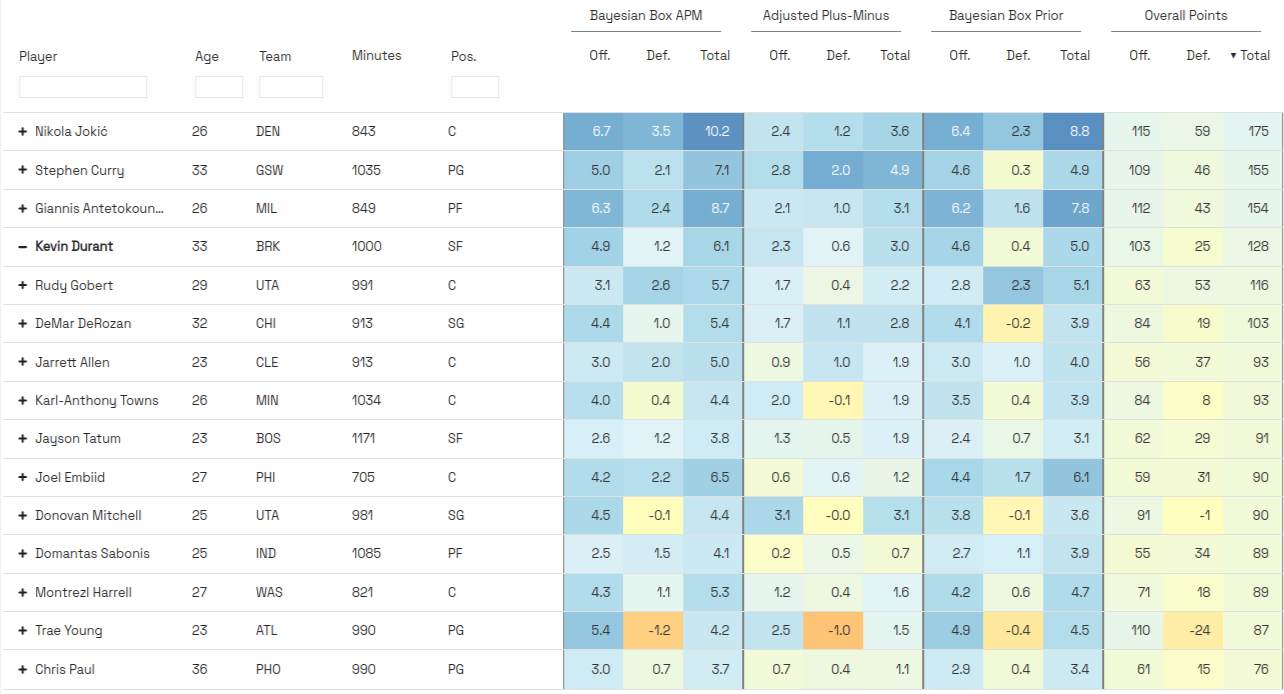 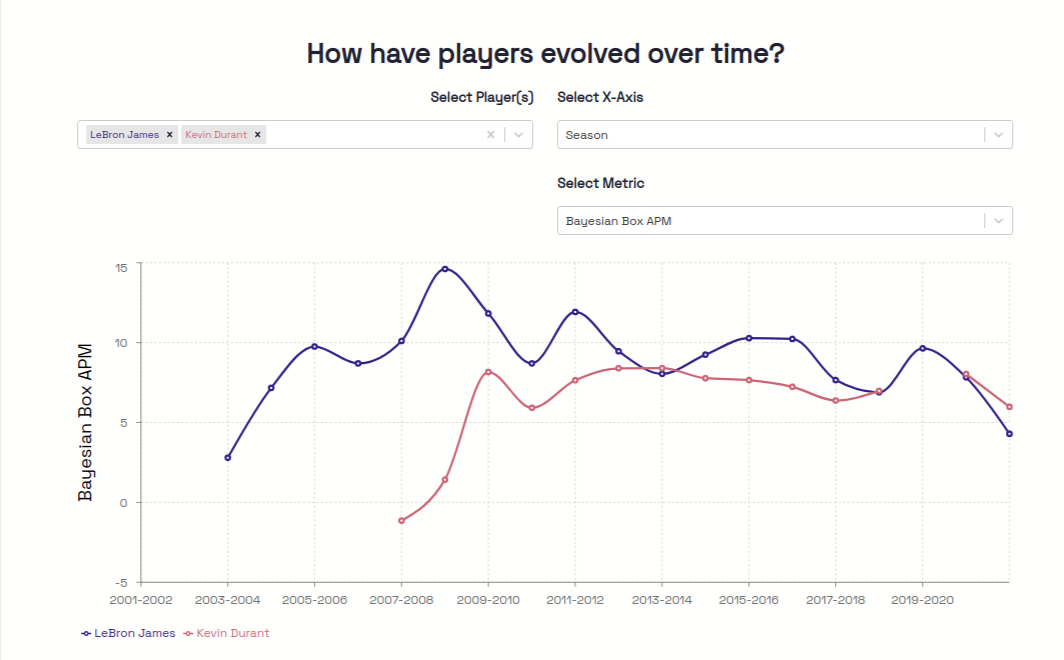 If there's other data/analysis you'd like to see, or if you have general feedback, or anything else, let us know. We hope you enjoy the App!

The post provides enough information to understand Bayesian Box APM intuitively, and use the results to analyze players. The appendix gives additional information for folks interested in the model and context.

How we came up with BayesianBox APM

We got the idea for Bayesian Box APM after building our augmented adjusted plus-minus ratings for soccer. Initially, we planned to use 2K ratings as a prior for each player, similar to the way we used FIFA ratings. This worked OK, but we found that box-score statistics were more predictive, reliable, and interpretable. We'll test the integration of 2K ratings in a future post.

The basketball statistics world is quite sophisticated. There are several other advanced player statistics out there. Some other good one number statistics we've found:

This kind of makes sense. But in our view, it's cleaner to consolidate these steps into a single model. In a sense, Bayesian Box APM formalizes these approaches, which correctly intuit that player-statistics and adjustment plus-minus are both valuable. Aesthetics aside, there are other technical advantages:

In the weeds: The math behind Bayesian Box APM

The standard adjusted plus-minus model is a linear model:

Our Augmented APM soccer model uses FIFA ratings as a prior for each player:

The final part of our model is a hyperprior over each box score statistic: