This article introduces offensive and defensive Augmented APM for soccer. It's a tricky problem, so we start by explaining what makes it tricky. Then, we show how design-matrix weights achieve realistic adjusted plus-minus ratings without a prior. Finally, we extend our FIFA prior to work for offense and defense, which results in our final Augmented APM model.

Our soccer app is updated with the latest results.

You could argue that great offensive players, such as Lionel Messi, influence both offense and defense. For example, Messi forces opposing teams to play defensively, and increases his team's time of possession. What is the right way to balance this?

It helps to consider a thought experiment. What would happen if Messi went to the MLS? To be concrete, let's say Messi transferred to the San Jose Earthquakes. It's easy to imagine San Jose scoring many more goals. But would their defense get better?

How we compute Pure APM for offense and defense

Pure APM simply means adjusted plus-minus with no prior. It only considers how many goals were scored or given up by a player's team, controlling for teammates and opponents.

Pure APM is a highly important signal. It separates how much of a player's rating is due to the prior, and how much is due to their performance. That's why we include it in our apps.

The question is: how does pure APM for offense/defense work in soccer?

Why pure APM for offense/defense in soccer is tricky

Let's make the issue concrete. Here are the top ten players, ranked by pure offensive APM, in the 2021-2022 season:

This kind of makes sense. Some of the best offensive players (Mbappe, Sane) are ranked in the top ten. But other results are just too weird. Notably, Neuer is a goalie, who contributes nothing on offense. But in this table, Neuer is the #1 offensive player. This is an obvious miss. And we also see center backs and fullbacks in the top ten: also clear misses.

What about defense? Here are the top ten players ranked by pure defensive APM:

Like offense, this kind of makes sense. van Dijk and Rudiger are well-known defensive players, and it's great to see them in the top ten. Even Jorginho makes some sense, despite being a Midfielder. But again, there are just too many obvious misses. Lars Stindl is not a top-ten defensive player.

In sum, pure APM doesn't pass the eye test. How can we fix it?

How design weights fix the problem

The egalitarian principle behind pure APM is that every player contributes equally. This principle rewards players who are overlooked by traditional box score statistics. Shane Battier is the canonical NBA example.

Equal weights make less sense in soccer. In soccer, forwards can stand 50 yards away while the rest of their team plays defense. These forwards have nothing to do with a team's success on this defensive possession. Why should they get any credit?

To demonstrate, recall the image in our original post where we showed what the design matrix for adjusted plus-minus looks like: 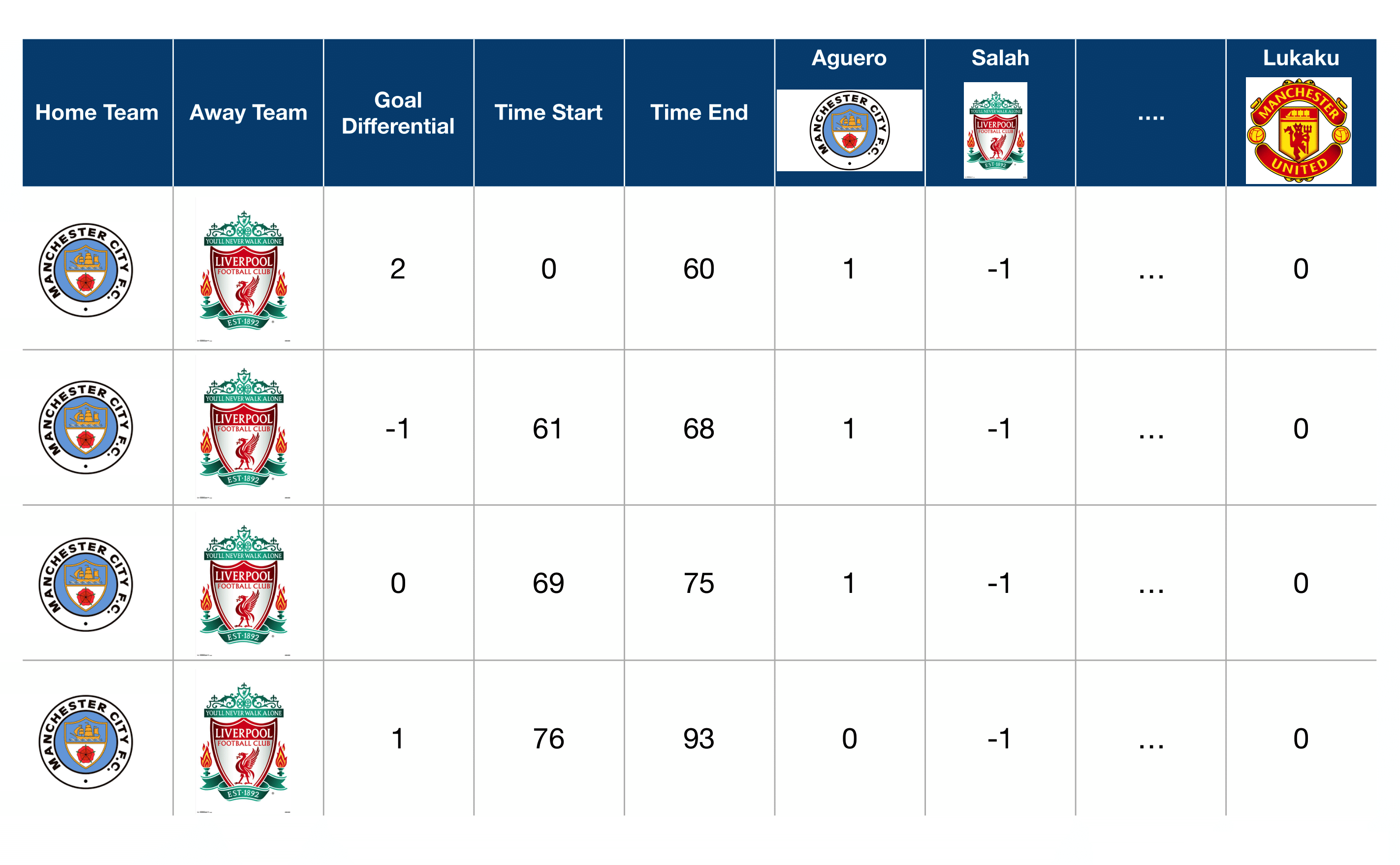 The 1's, 0's, and -1's under the player columns represent player contributions to the game segment. Design-weighted APM changes these values. For example, Salah may get a 1.3 for offense, and a 0.7 for defense. That's all there is to it.

Does it work? Let's look a the top offensive players according to design-weighted APM:

Here are the top defensive players according to design-weighted APM:

Like offense, the results make a lot more sense. We no longer have any forwards/attacking mids in the top fifteen.

For a deeper understanding of how design-weights impact player ratings, it helps to analyze the results in aggregate. The following image compares player ratings with even weights vs. design weights, split by player position: 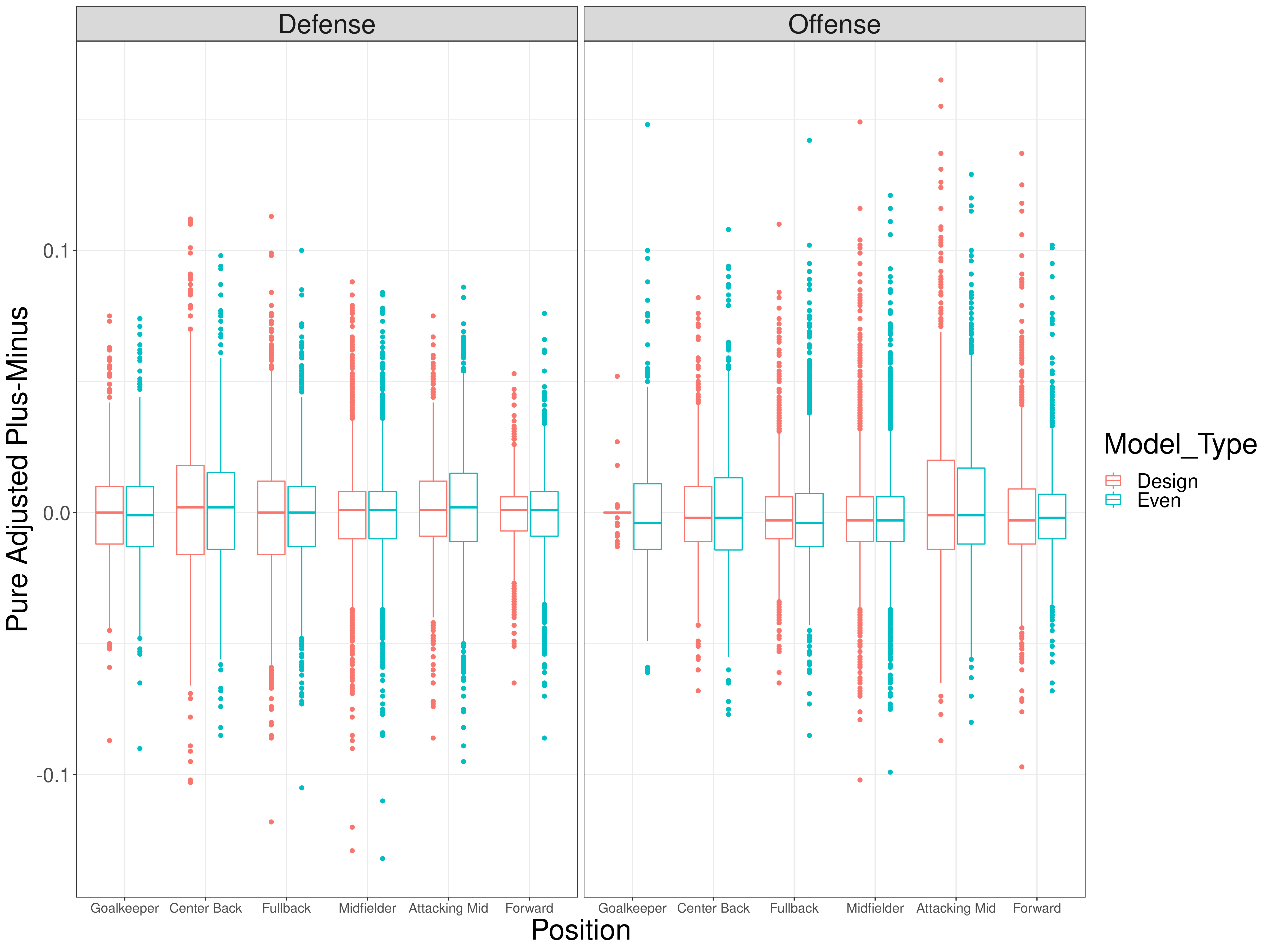 What design weights we used, and how we pick them

When you pick design-weights, there are two things to consider:

Our model uses player position as a criterion. There are obvious improvements possible (distance, number of touches, etc.). But position is simple to implement, works well, and can be iterated on in the future.

We selected values by running cross-validation with different sets of weights, for each position. Our principle was to improve interpretability, without sacrificing prediction accuracy. In the end, we found design-weights that marginally improved prediction accuracy (over even weights). Slightly better predictions, coupled with drastically improved interpretability, made the decision to use design-weights a no-brainer.

How we compute Augmented APM for offense and defense

Quick recap: the previous section extends pure adjusted plus-minus from overall to offense and defense. To build Augmented APM, we need a prior. The question is: what prior should we use?

Despite the importance of rating players, there aren't too many systems that holistically rank every player in the world. Much less keep the ratings up to date. FIFA ratings are one of these systems.

And for our purposes, FIFA ratings work well because they estimate the same quantity APM estimates. Specifically, FIFA and APM estimate how good is each player right now. This key fact explains why FIFA ratings provide a useful prior in Augmented APM models.

Some folks complain that FIFA ratings are subjective. I get it.

And that's just for overall APM. FIFA ratings shine when we need a prior for offense and defense. As mentioned earlier, good defensive statistics are hard to come by, and FIFA defensive ratings are deeply intuitive. To demonstrate, here are the top ten defensive players in the world according to FIFA:

It's hard to get more intuitive than that.

We did look into other defensive statistics. But we couldn't find a good match. Transfer market values give too much weight to young players. And box-score statistics, like interceptions, and even goals, don't account for the time of possession: players with the most interceptions tend to play on the worst teams. There's room to improve this, but it will take time.

Finally, keep in mind that we can use as many signals as we want in the Augmented APM prior: 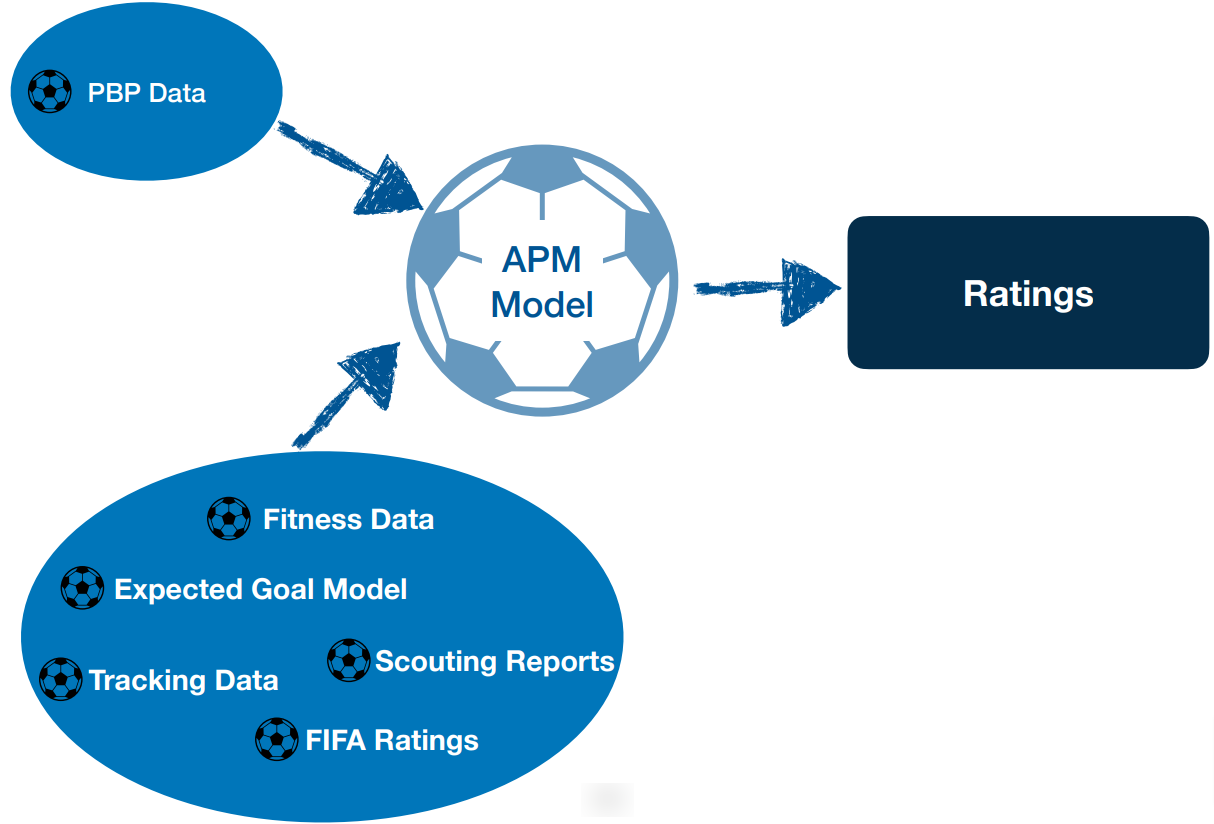 As we get better and better defensive statistics, they can be seamlessly integrated into our model. Future blog posts will cover these integrations. But because FIFA ratings provided the clearest path towards version 1, that's what we use.

The learned FIFA prior for offense and defense

In our basketball model post, we showed how our model learns the importance of different prior components as part of the model fitting process.

We take the same approach for soccer. Specifically, FIFA ratings are split into various components, and we use several of these components in our prior:

Let's look at the results. Here are the fitted values for the offensive and defensive coefficients over the past five seasons: 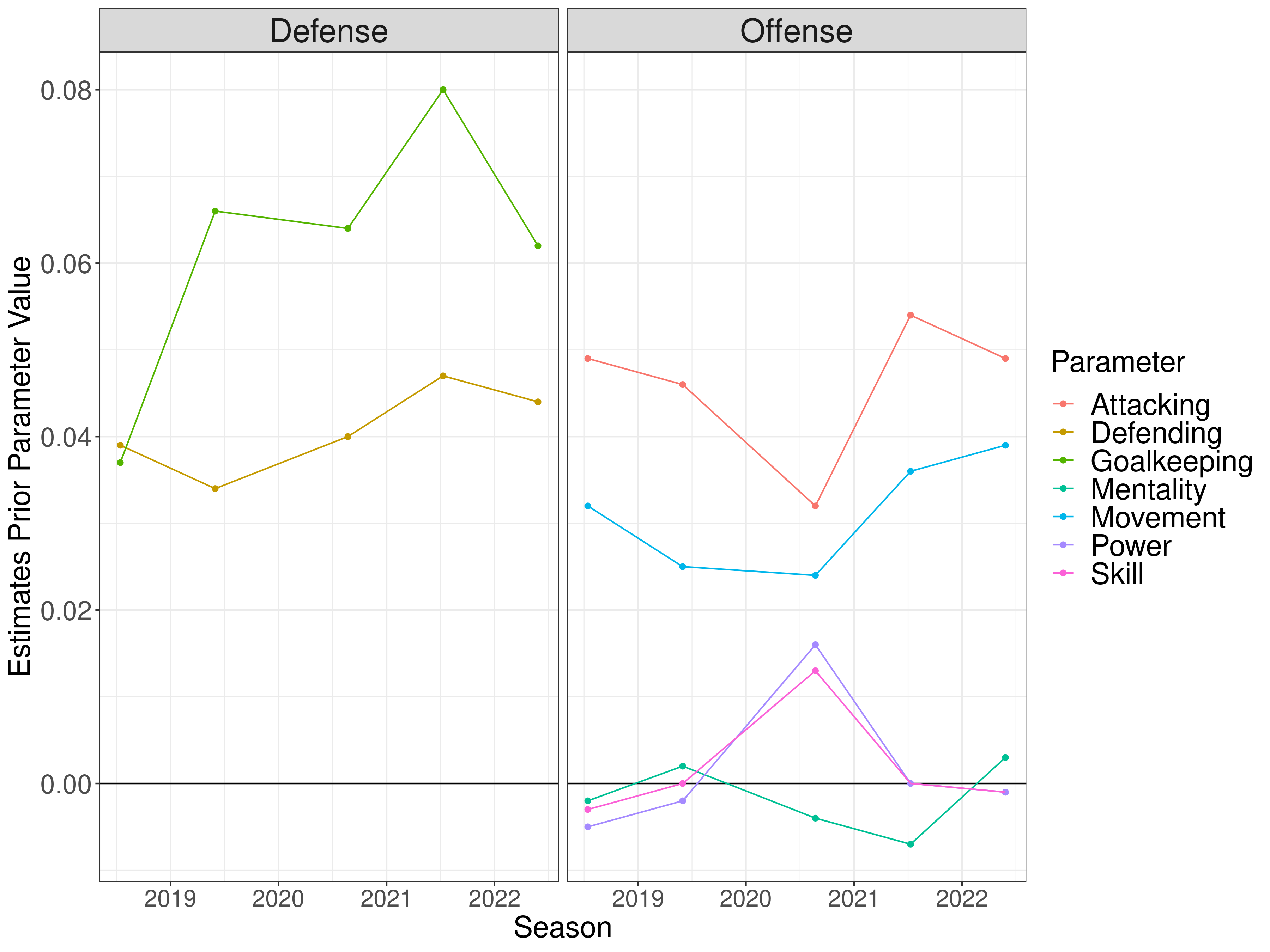 For offense, Attacking and Movement are the most important FIFA ratings. This is consistent in every season we look at. Power and skill are somewhat important in a single season, but mostly hover around 0. For defense, the Defending and Goalkeeper ratings work as expected, and are highly predictive of a player's defensive performance.

The results of our offensive and defensive model for the last five seasons are now live in our soccer app. The ratings include matches from:

As expected, Benzema is the #1 player. Benzema led Real Madrid to a champions league title and is the favorite to win the Ballon d'Or.

Now let's look at the top ten offensive players. The following table shows their offensive Augmented APM rating, Adjusted (Pure) APM rating, and Prior rating. The prior rating is what their rating would be if they played 0 minutes, and is a direct translation of a player's FIFA rating:

You can see a nice mix of common sense and surprise in these ratings. There are many familiar names in the top ten (Benzema, Mbappe), but we also have Patrik Schick. Schick is a surprise, and APM indicates that Schick may be undervalued, and a good transfer target for teams in search of a forward.

Again, we see a nice mix of common sense and surprise. Van Dijk is the top defensive player in the world. Van Dijk combines the #1 prior rating for defenders, with the #2 pure defensive APM rating, which is a powerful combination.

Marcos Acuna is a surprise. Acuna's high defensive rating is because he was a top defender on Sevilla. And Sevilla allowed the least goals in La Liga. Gleison Bremer is another surprise, who played on a Torino team with the 5th best defense in Serie A.

These results only scratch the surface. Our interactive soccer app has so much more. Go check it out!

We plan to release ratings for the current season around a month into the season. We'll continuously update the app on a daily or weekly cadence throughout the season.

Thanks to Francesca Matano, Collin Politsch, Taylor Pospisil, Lars Magnus Hvattum, Brian MacDonald, and Michael Shuckers for helping me think through the ideas in this blog post.